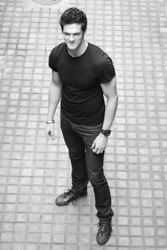 ian@i-n-d-j.com +86 13816216312
Ian is a young british architectural designer based in Shanghai, PR China. He is an associate and lead designer for internationally acclaimed studio Broadway Malyan. He has recently led a high profile supertall tower to second placing in an international design competition beating star-architects of repute.

In 2009 Ian founded i-n-d-j architecture & design and has been involved with a broad range of projects, displaying his skill and versatility as a designer; from commissions by the London Design festival with a lead installation at the Victoria & Albert Museum, a lead project for the Melbourne design festival, and a commission at the world famous ice hotel working with internationally acclaimed designer Ben Rousseau.

Ian has been internationally published and has practised globally from the United Kingdom and Europe to New Zealand and Australia with work spanning all corners of the globe. More recently Ian worked in Melbourne Australia and is now furthering his career in the world’s foremost market, PR China. Here Ian's design versatility is implemented to successfully lead large complex mixed use schemes.